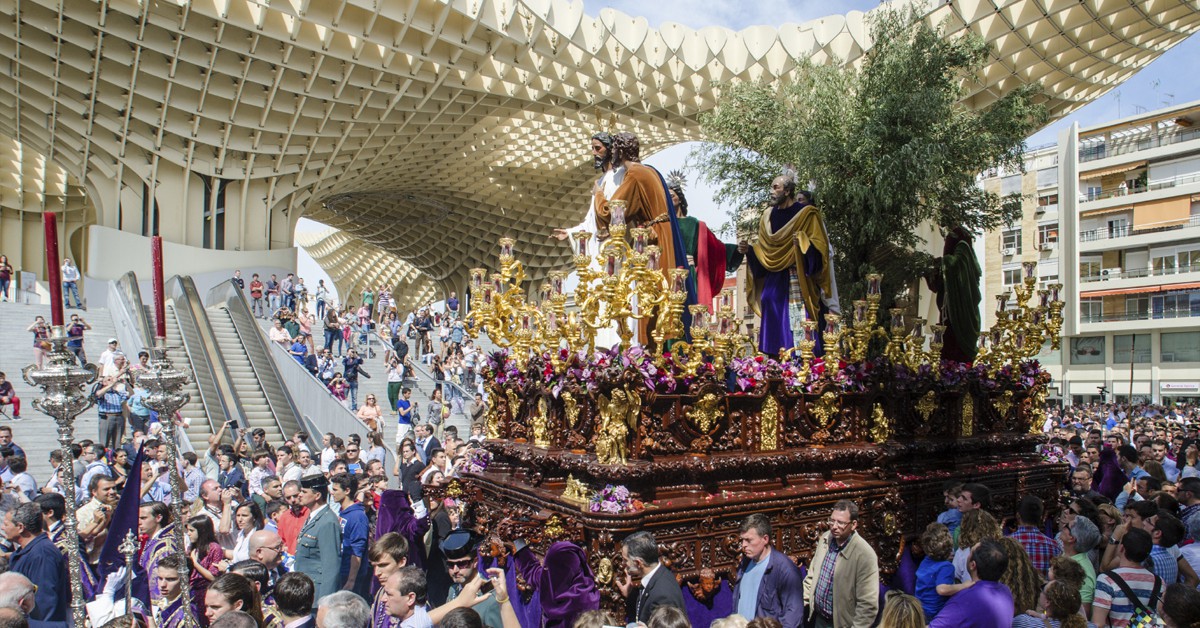 All you need to know about Semana Santa in Seville 2019

The origins of the penitential Holy Week in Seville are to be found in the 16th century. It is one of the city’s two biggest annual festivals. During the Holy Week religious brotherhoods organize processions all over the city. At this time you can see hundreds of members of the processions who are dressed in penitential robes with capirotes, tall, pointed hoods with eye-holes. They acompany their saint images on the way to the Cathedral.

This year date for the Holy Week is: from 14th to 21st april

Brotherhoods that participate in the Holy Week

There is 58 brotherhoods in Seville that participate in the Holy Week. Some of them, like for example True Cross or The Silence have more then 500 years.
Among the most famous are those that participate in La Madrugá, such as Brotherhood of Great Power /Hermandad del Gran Poder/ or Brotherhood of La Macarena. Sevillan people are very passionate and emotional about their saint figures.

All of the processions pass through an official viewing area which occupies some of the city’s main streets, beginning in Campana, followed by Calle Sierpes, Plaza San Francisco, and Avenida de la Constitución, before reaching the Cathedral. Once they already leave the Cathedral, they come back with the images of their saints to their churches. 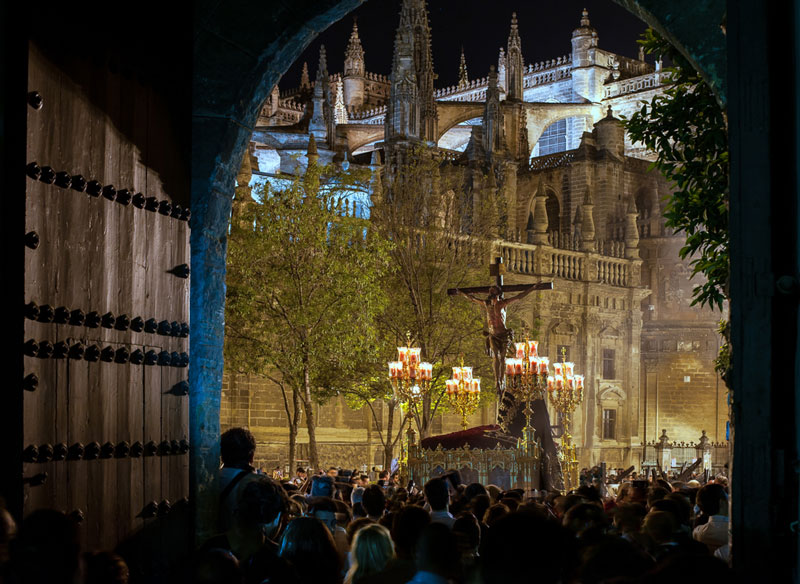 The pasos, treasures of the Holy Week

Sevillians acompany the images dressed as Nazarenes, carrying candles, crosses and other elements of the brotherhoods. Each one has its own dress in different colours.
The pasos of the Holy Week in Seville are real pictures of art where the procesional images are carried
The costaleros are the ones who are carrying the pasos. As they are all inside the structure and hidden from the external view by the curtain, the paso seems to be moving by itself. The groups are formes by 30- 40 costaleros.
Another important figure of Holy Week in Seville are the capataces. They are responsable for directing the costaleros and keeping the pace of the procession. 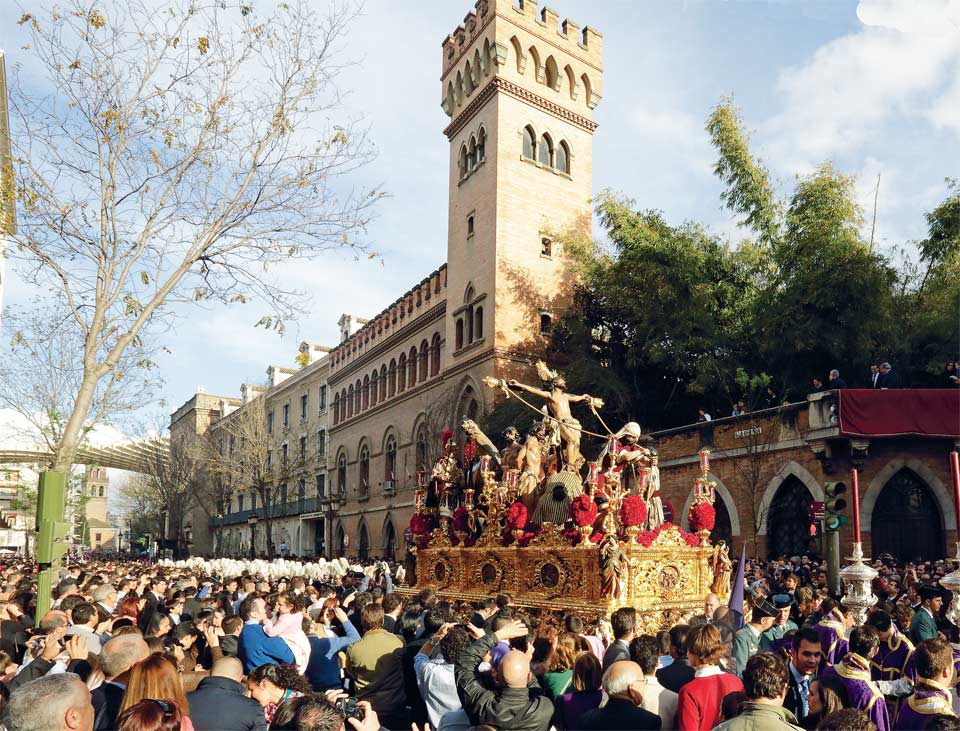 Some of the pasos are acompanied by music bands to interpret procesional marches. The most popular ones are Las Cigarreras or Las Tres Caìdas which are also known nationally. 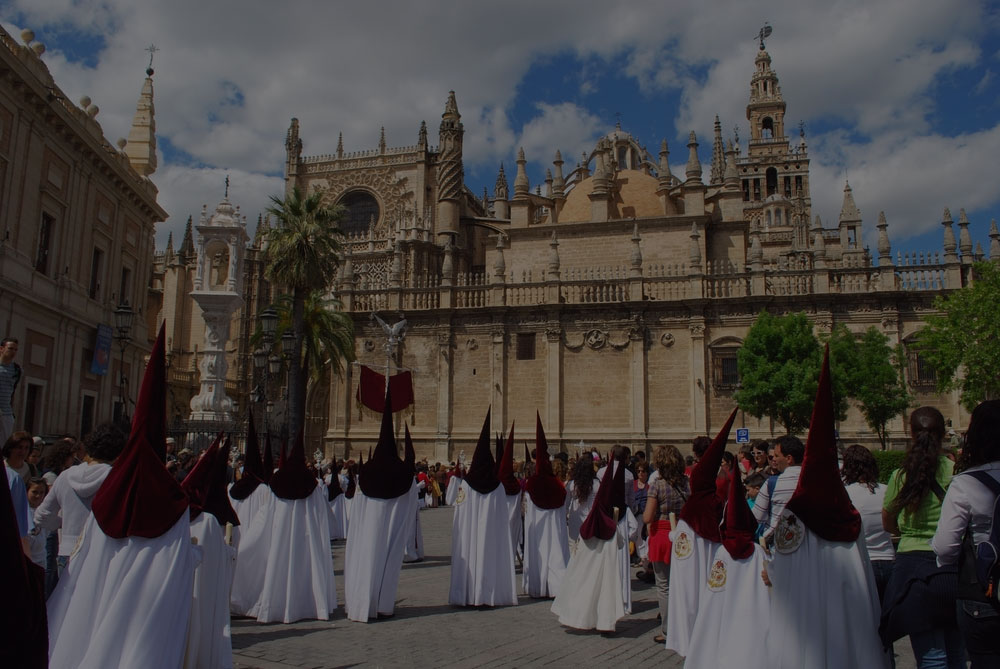 Our boutique hotel is situated perfectly if you come to Seville to see the Holy Week. We are located at the back entrance of the Church of Santa Cruz where the brotherhood of Santa Cruz, the one of the oldests and the most traditional one from the city, is entering.
Our clients have the possibility to see the procession every day in a walking distance from the hotel as we are surrounded by the streets where the processions go directly to the Cathedral or they are coming back to their churches.
Enjoying the Holy Week in Seville from 14 till 21 of April 2019 in our boutique hotel is the best way to spend your holidays.